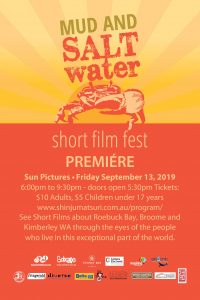 Tickets are live – book now and feel the excitement of the 2019 Premiere Night on September 13, 2019 (always books out), with the short films beamed onto the big screen for the first time. Filmmakers will have a chance to win the much sought after ‘Muddy Award’ for the Best in Fest short film, but gosh, there are so many fantastic films this year!

Sun Pictures, the world’s oldest outdoor picture theatre, is the perfect location to screen the short films about Roebuck Bay, Broome and the Kimberley Region. With the Kimberley, rugged scenic and rich in natural heritage ad cultural values, there are plenty of fascinating, and at times hilarious and perilous stories to be relived through films.