The packed to the rafters audiences said it all “The Mud and Saltwater Short Film Fest is the best run community event I have ever been to!”, “The films just get better and better every year”, “I make sure I never miss the Mud and Saltwater Film Fest – it’s the best event in Broome”, “The Film Fest makes me feel proud to live in the Kimberley”. 👏👏

Thank you to the filmmakers who submitted such wonderful films, to our incredible sponsors, the audiences who kept clapping and cheering, to our lovely volunteers, the judges Mark Jones, Neil Turner, Dr Michael McCall, Paul Bell, Bart Pigram for being a legend of MC, Abby Murray Photography for the great photos and to the Director Kandy Curran and Producer Pia Boyer who do such outstanding work to make it all happen. 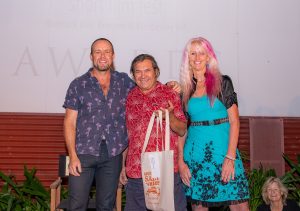 Feature Film: “How to Make Saltfish” by Paul Bell

Best in Fest: “How to make Saltfish” by Paul Bell

Your support is very much appreciated.